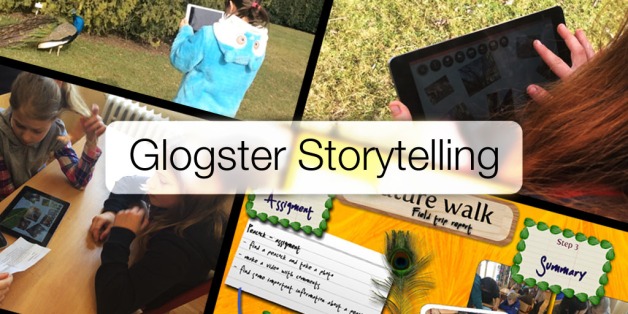 Digital storytelling is one of the classroom buzzwords of the year, but its origins are ancient: from the beginning of time, humans have used their imaginations to share knowledge through engaging and emotive stories. Now, with the internet and remarkable creative tools at our disposal, the legacy of telling tales can be expressed vividly and shared across the globe.

Chances are you already use digital storytelling in your classroom: any time you or your students use technology to share thoughts, feelings or creative responses to educational stimuli, that’s what you’re doing. Glogster is an ideal platform for bringing these stories together, allowing learners to spend their valuable time considering what they have to say and how they want to say it, rather than fretting over complicated tools.

We’ve dreamed up five ways to incorporate Glogster and make your story not only heard, but seen, interacted with, and truly experienced.

When working with early learners, one of the most fail-safe ways to introduce a subject is through a storybook. By presenting children with an emotive context for new ideas and information, you can spark important questions in their minds naturally, rather than implanting them. It turns out that this fact is true across all ages and abilities. With videos, images, audio and text, you can create an atmosphere worth a thousand words, and ignite natural curiosity that will carry learners through the rest of the unit.

To introduce a topic in a way that leaves a lasting impression, try focussing on the specifics, rather than giving a general overview. For example, introduce a period in history by creating a glog about the life of one character, real or fictional, during that era. The glog can incorporate historically accurate images and audio as well as emotive text, helping students to put themselves in very different shoes. Likewise, a scientific topic such as plate tectonics could be introduced with a glog looking at life in an area affected by earthquakes or volcanoes. The human perspective will lead learners to ask more about the topic – why does this happen? What can be done about it? – and be excited to find the answers in later lessons.

Facts flow alongside feelings in this Digital Story about Jewish refugee children.

Storytelling can follow a very strict structure, or it can be completely free! In this case, the most important thing is letting every creative voice be heard. You might be surprised by what your learners can do without any borders! Simply create a glog template with an image, or series of images, on one side, and space for written or recorded reflections on the other. Your students’ task is to tell a story about what has happened in the pictures via text, audio, video, or a combination of the three.

This task is not just creative fun, allowing students to respond to a stimulus in any way they choose, but also a powerful exercise in drawing inferences, and seeking contextual clues in a limited stimulus to build a wider picture. Your follow-up discussions can elaborate on these skills for life, once your learners have had a chance to use them naturally and imaginatively.

A student journal can fulfill all sorts of purposes: allowing learners space to focus their busy thoughts, getting to know your quieter learners and their needs as well as the more in-depth reflections of louder students, and giving learners a record of their own learning, for example. While some students may not enjoy the idea of writing in a diary as much as others, a glog can offer the same opportunity for snappy “status updates” as the social media that comes naturally to them, alongside images, videos, audio and links that they find interesting.

Set up a template for your learners, with space for weekly reflections. Each week you can set aside a short amount of time for learners to update their class “statuses”, and to find some media that supports or expresses their thoughts for the week. If some learners have a hard time getting started, offer some ice-breaker questions such as “What have I improved at this week?”, “What have I struggled with this week?”, or “What do I want to learn more about next week?” When they look back at the end of the year, they will see the most important story of all: their own educational journey.

This is one for English teachers! When preparing to study a new text, assign learners a character to write a glog journal for each week. As the plot of the book develops, so will the journals, and along with them your learners’ emotional connection with the text. The joy of this is that the more engaged with the character learners become, the more their reactions to the events of the text will become genuine.

Social Studies teachers can take a similar approach, but allow learners to create their own character. For example, when preparing to study the Civil War, you could assign learners a glog in which they give a general outline of their character, including a name, age, social class, and feelings about the war. Each week, as they learn about the progression of the war, students can add another glog, imagining how these real-life events would have affected their characters.

Including multimedia in these journals is a great way for learners to practice their research skills, as well as build up a deeper picture of the life of their character. Media could be presented in the form of a scrapbook, with images representing things that the character owns or finds, or perhaps a modern alternative – a blog. Imagine Ishmael’s blogs from the stomach of a whale in Moby Dick, or the sort of ‘selfies’ that a Medieval knight might post as he rides into battle, and you’re already halfway to an amazing journal glog!

Perhaps the most compelling way that technology has advanced storytelling is by delivering film-making capabilities into everyone’s hands. With the Glogster application for iPad, making student videos is so simple that it’s opened up a whole new way to present final projects – through a student film festival!

Encourage learners to work in groups throughout the school term to research, structure, write and film short movies based around the subject they’re studying. Footage can be shot directly onto the iPad, and can be presented in a glog alongside credits, fun facts, useful links and even a ‘director’s commentary’ audio clip.

At the end of the topic, set up your classroom to look like a cinema, buy in some drinks and snacks, and let your learners enjoy one another’s creations. For an extra spin, you could allow the class to vote on their favorite clips, and award a prize to the winning group!

This storyteller went above and beyond, creating a whole imaginary culture and religion!

We’ve certainly exercised our creative sides thinking of some fun ways to tell stories with Glogster, and now only one question remains: What’s your story?